Hobbits aren’t the only ones who need supportive feet….. 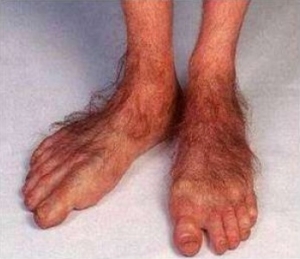 The thought of carefully carving intricate ball and claw feet in the style of Chippendale makes me want to drink hard liquor, so I’ll stick to the simple, yet very strong foot design in the original plan.

Each foot is composed of two side pieces mitered to make a corner, and a square gusset piece set into a rabbet cut at the tops of the sides. The gussets are simple so I start by cutting four squares a little longer on each edge than the width of the sides. I’ll trim off the excess after glue-up. While the plan calls for 3/4 inch stock, I use 23mm (7/8+ inch) to ensure strength. 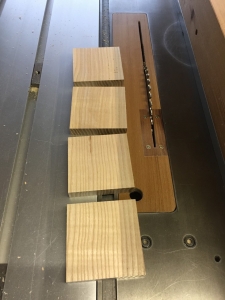 I notice while cutting the gussets that my saw blade seems to be bogging down a bit and sure enough, a close look at the teeth show a bit of pitch/resin build-up. This not only slows down a cut, but affects how clean a cut is produced. In addition, it produces heat build-up which further degrades the cutting action, causes burning of the wood and can prematurely dull the carbide teeth of the blade. 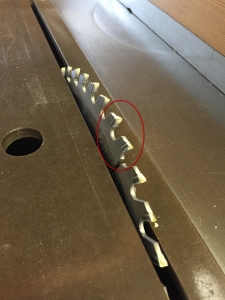 A cleaning is in order so I remove the blade and lay it on an old piece of cardboard. When I received the machine, it came with an assortment of cleaning materials, one of which is a “special” blade and bit cleaner. Before that, I used household Simple Green to clean my blades. It works good and is bio-degradable and non-toxic. After I run out of the special stuff, I’ll probably find a citrus-based equivalent since I haven’t seen the household Simple Green in Switzerland. So I take the blade outside and spray the teeth liberally. I only wait a minute or two and then the scrub the teeth with an old tooth brush (at most, a brass bristle brush), rinse with water, and immediately dry the blade with an absorbent rag. If it’s a sunny day, I’ll also leave the blade in the sun for a few minutes before wiping on a very light coat of oil. I’m paranoid about rust.

Nice clean teeth, and I didn’t even have to floss 🙂 . 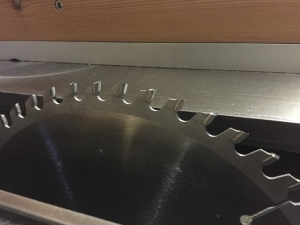 Now back to the feet. I choose a board with a relatively even grain for the side pieces of the feet. 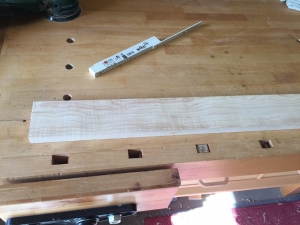 The reason for this is because when I cut the sides and then miter them, I want the grain to match and “flow” around the corner of the foot to create a pleasing effect. I mark out the pairs on the back side and number them so I don’t lose track after they are cut.

Since all of the sides will have a rabbet cut in them for the gussets, it is much more efficient to cut the rabbet in the full length of the stock now, rather than make eight individual rabbets later. 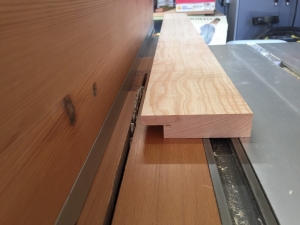 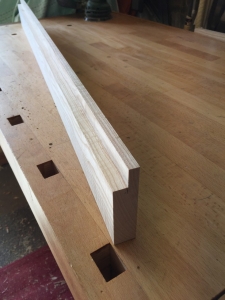 So we have four pairs of sides, eight pieces to cut. One way to crosscut multiple pieces the same size is to clamp a scrap to the fence and adjust it so that the face of the scrap is the distance required from the blade. 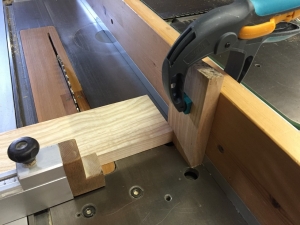 Then, I slide the stock against the scrap piece before each cut. This not only produces identical pieces, but more importantly, allows a gap between the piece being cut, the fence, and the blade. Now I can cut all the pieces without even moving them out of the way after each cut. 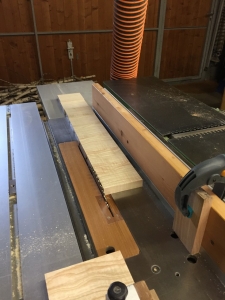 Below is a pair of sides that will get mitered. Notice the matching grain. 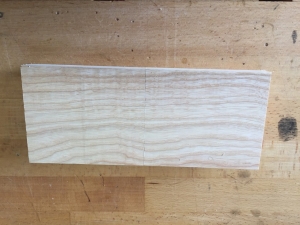 In order to miter the two pieces and form a nice square corner, I need the sawblade to be set to exactly 45 degrees. The scale on my saw is pretty close, but it is only a starting point so I use a couple of scrap MDF pieces and cut miters in them, check, adjust the blade, saw and check again, until it’s perfect. 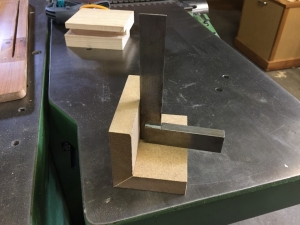 Only now do I cut miters in the actual side pieces. You can see how the internal rabbet wraps around and provides a place for the gusset. 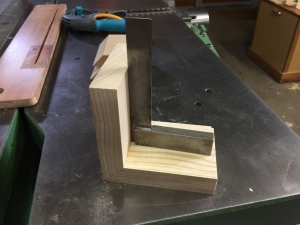 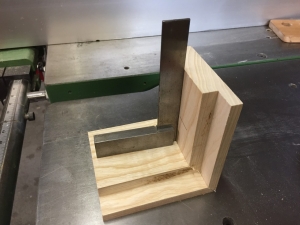 The last thing to do before gluing-up the feet is to cut a bevel in two sides of each gusset. After glue-up, a 15 degree angle will be cut in the sides of each foot and we want the gusset to match this angle. Before I cut the bevels, I check each of the gussets for square. In all four of them there are at least two corners that are perfectly square; I mark one of the corners on each gusset. This will be the corner that fits into the rabbet in the sides and will help keep everything square during glue-up. The two edges of the gusset opposite the square corner will get beveled.

I set my protractor to 15 degrees and adjust the tablesaw blade, set the fence and cut the two bevels in each of the four gussets. 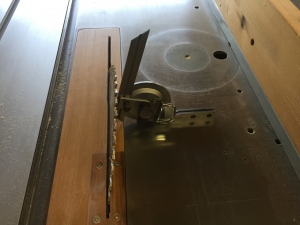 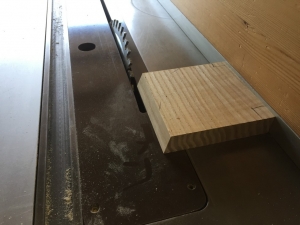 I leave the protractor set at 15 degrees so I can use it to setup for the angled cuts once the feet are all glued up. However, I’m curious to see how it will matchup so I set the crosscut fence to the blade (now back in its normal position perpendicular to the table) using the protractor. 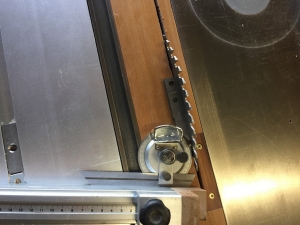 I cut a scrap piece and then check the angle against the bevel on a gusset. It matches very nicely. 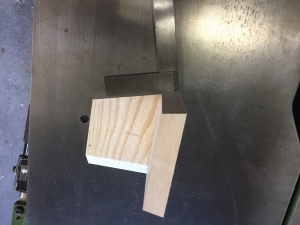 There are many who say that woodworking is not a craft of exact tolerances but it is definitely a benefit to be as exact as possible. I shouldn’t be surprised, but I am a little, and very pleased that I can transfer the bevel angle so accurately to the crosscut fence.

The glue-up of the feet will be interesting, two mitered pieces plus a square gusset. I could do this in two parts by gluing the sides first and the gusset second however, clamping would be tricky. I could make a couple of special clamping blocks but I happen to have a corner clamp that will make this a little easier. The corner clamp is designed more for picture frames (for stock that is not that tall, unlike these feet) but if I use it to first set the miter and then add the gusset, I can get clamping pressure along the entire edge of the miter and at the same time, use the gusset to keep things square. I do a dry run with the corner clamp to ensure I’m going to get a tight fit. 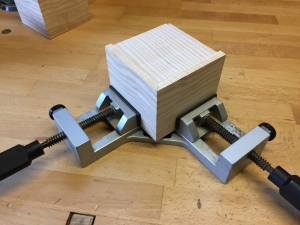 And now with a bevy of clamps, the whole foot is glued at once. 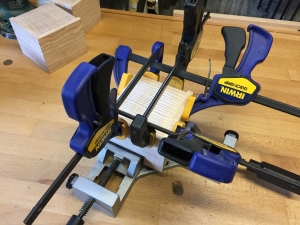 Unfortunately, this means I can only glue-up one foot at a time but after an hour and a half I can remove the clamps and do the next foot. Tomorrow I’ll get the other two feet glued. In the meantime, I start some work on the doors.

Two evenings later, all the feet are glued. 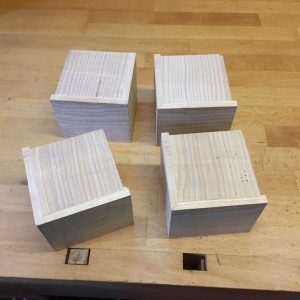 Now I go back to the tablesaw to cut the 15 degree angle on each side of the feet. With my miter fence set to 15 degrees, I can easily cut one side of each foot. Because all the pieces were cut the same size and the joints are tight, I can set the stop on the fence and cut all four feet (on one side) at the same time. 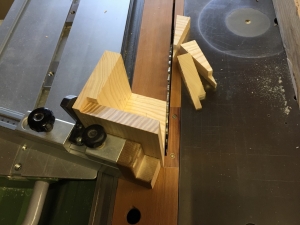 If you consider the shape of the foot assembly, you’ll realize that while I can cut one side to 15 degrees I can’t cut the other side the same way. The foot would have to be on the opposite side of the blade than it is now. To solve this, I need to rotate the foot and flip it 90 degrees so I set my protractor to 105 degrees (90 + 15) and reset the miter fence. 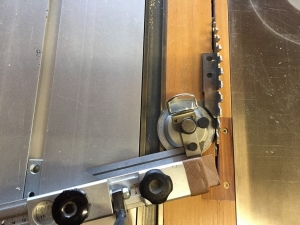 The fence stop won’t get close enough to the end of the fence so I use a spacer block and I can now cut the second side of each of the four feet. 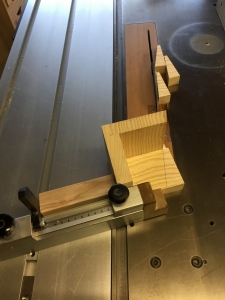 I use my block plane to ensure all the places where wood joins together is flush and then to the router table with a round-over bit installed. The two vertical edges and the corner itself are rounded over. 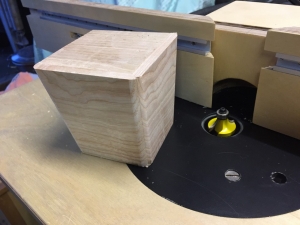 Finally, I use my sanding block to touch up and smooth the remaining edges both inside and out and the feet are ready to attach.

The feet will have a 6mm reveal on both sides of the corner. For the two rear feet, positioning is straightforward and I clamp the foot in place, mark the positions for four screws, drill and install the screws. For final assembly these will be glued however, I’ll want to remove them again when it’s time to do the final sanding of the case. 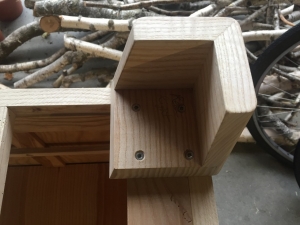 For the two front feet, I want the 6mm reveal to be visible when the doors are closed so in order to position the foot correctly, I clamp a piece of scrap that is the same as the door thickness to its front side. The scrap simulates the door so I can clamp the foot in the right place before marking for the screws. 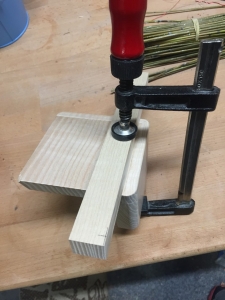 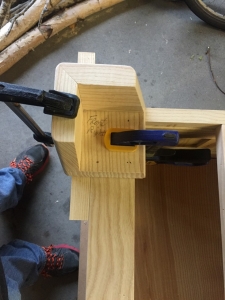 This completes the feet and I turn the case right side up to see how they look. I like the way the grain flows around each foot even though most people won’t notice it specifically. Careful design considerations like this add up to a pleasant visual effect when looking at the whole piece of furniture. 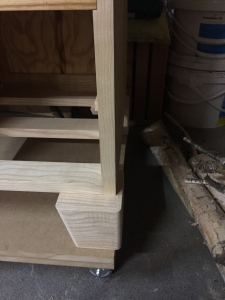