Or: Hobbies that lead to practical skills

Or: Thoughts on American Anarchism 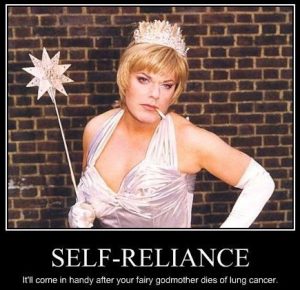 First, some boring history. It probably started when I was a kid and built my first model. If I remember correctly (a dubious conjecture…) it was a P-51 Mustang by Revell. 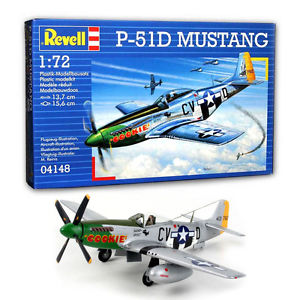 The Revell kits were great and came with parts, plans and decals. You unpacked the parts which were plastic-molded and if you were like me, the first thing you did was cut all the parts off the frame and shave the little nubs off so they were ready to glue. 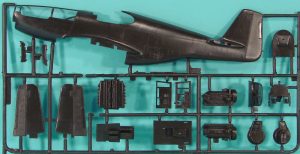 The instructions and plans were usually pretty detailed and showed you how the pieces fit together. After the build was complete, you painted it and then applied the decals. 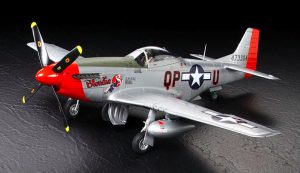 Mine rarely looked as good as the picture above but I loved building them, and for quite a few years of my childhood I could expect a kit at birthdays and Christmas (the kits were relatively inexpensive). Maybe this caused my “creative gene” to atrophy but I never missed it (My only real attempt at “art” came in 5th grade when I did a pastel of one of our Rottweilers. Complete catastrophe; very sad).

My first woodworking project was a balsa wood kit, and also an airplane. 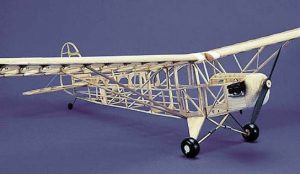 It’s funny, I loved airplanes, but all I can remember about “career questions” when I was in grade school was that I wanted to join the Navy and be a submarine captain. At 19 years old, I got so far as to start the Navy paperwork and had one more appointment before I would “ship out”. That is, until the Air Force recruiter talked me out of it. Something about 6 months at sea with no girls around….

So to the point, two actually. I discovered early in life that 1) I liked to build stuff and 2) I could follow directions.

After I joined the Air Force, I moved on to radio-controlled airplanes also made out of balsa wood and covered with plastic film. My first was a glider that was easy to fly and learn on. Except for the electronics (which you could move from plane to plane) the kits were not that expensive (noticing a theme yet?). 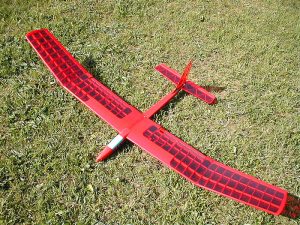 It was all fun until things started going wrong with my car. I had been really lucky to that point since my first two cars had never given me any trouble (a 1970 Plymouth Fury III and a 1971 Ford Mustang. Heavy sigh, I should never have sold that Mustang). All I had to do was the occasional oil change and tune-up with a little help from my Uncle Charlie, who was a mechanic.

After I joined the AF, I bought a 1977 Mercury Bobcat wagon (don’t laugh you hosers, it was cheap and I wanted a “camping car”). It was a lemon because little things were always breaking. What with sending half of my salary home I could never afford to pay a mechanic to fix the darn thing so I bought a Chilton’s manual. Back then, Chilton’s and Haynes were the definitive “auto-repair Bibles” and you could buy one specifically for your car. 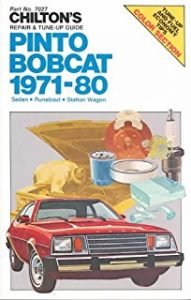 I became acquainted with Pep-Boys and Napa Auto Parts and started acquiring tools as I needed them. Or, if I needed expensive tools, there was the auto-hobby shop on Pope AFB where you could rent a space and use all their tools cheap. Except for the hassle of getting to work and back while I was fixing the car, it was actually pretty interesting. Follow the directions, remove the bad part, install a new part, car is back on the road! $15 for a water pump and about 2 hours of work and I did the job a mechanic would have charged me $100 to do (mid-1980’s economy).

And from there: fan-belts, starters, alternators, leaky hoses, brake pads, you name it. The same thing when I got stationed on Okinawa, only now they were Japanese cars (“scuba dive-vans” to be exact). 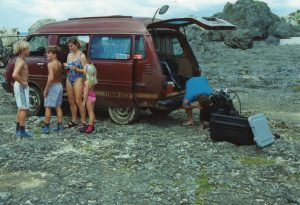 So I was scuba diving, working part time at the Kadena Marina, and this conversation took place:

Me: “Honey, they’re auctioning off an old boat at the marina!”

Monika: “It looks like it needs a lot of work….” 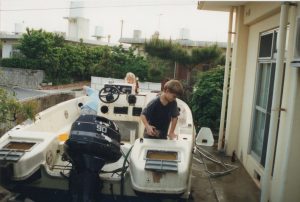 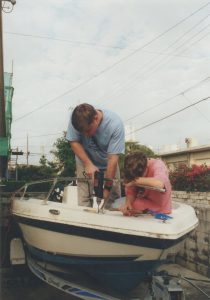 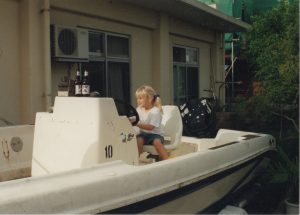 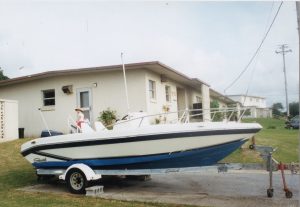 A LOT of elbow grease….(and no, that’s not Naomi’s beer). We learned quite a bit about boats including the fact that they really ARE holes in the ocean that you pour money and time into. It was the family project and also the first engine rebuild I ever did. Along with the boat came all the manuals for the Evinrude 90HP outboard motor 🙂 . 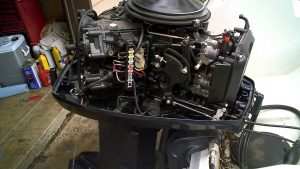 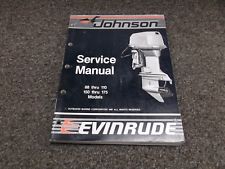 By the time we got the boat seaworthy we were only able to use it about a year and a half before I received orders to Kirtland AFB in Albuquerque but while we did, it was great. We ended up selling it for a little more than double our investment (in money, you never (ever, ever, ever,) get the value of your time and effort back).

So. We move to Albuquerque and the Kirtland base housing was the pits. This conversation took place:

Me: “Honey, let’s buy this house in the east mountains!”

Monika: “It looks like it needs a lot of work….”

Enter the might-as-well syndrome. “Let’s replace this nasty carpet with tile.” Well, we might as well paint. If we’re going to paint, we might as well replace the moulding. While we’re at it, we might as well tile the wall around that corner and install a wood stove. You get the idea. Picture a living room with crap-brown carpet, a diagonal wall with an insert fireplace, and dinged-up/brown-stained/pine baseboard.

Rip up the carpet, tear out the insert fireplace and diagonal wall, make it a corner again with new drywall. Lay down another layer of ½” plywood to beef up the sub-floor, paint the walls, and install ceramic tile. 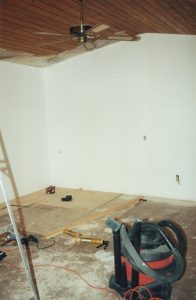 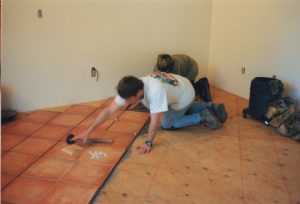 Oh, and wouldn’t it be nice to make a nice tile wrap-around and platform for a wood stove? 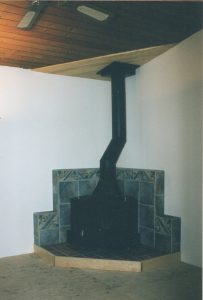 Yes, that’s bird’s-eye maple around the front. And yes, it was worth it.

And the finished product: 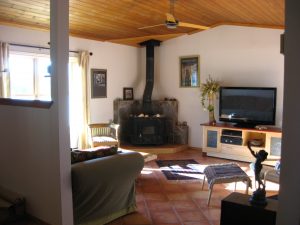 So now I’m acquiring books on tiling, wood stoves, carpentry, dry-wall, etc. And, there’s this great store called the Home Depot, and another one called Lowes. My wife’s favorite places (okay, mine too).

Before you fall asleep, we’ve finally arrived to the whole point of this article. I don’t have this innate ability to fix things and to build things. By necessity, I had to learn to do “stuff” because I didn’t have the money to pay someone else do them. Contrary to popular opinion, the US military pay isn’t wonderful. And….I discovered that I got just as much satisfaction (more) out of doing something for myself than I did knowing that I had saved a bunch of $$.

I firmly believe that almost anyone can fix a car, rebuild an engine, build a bicycle or renovate a house given the simple pre-requisite of literacy (read the General Safety Disclaimer). Get a book/magazine and read it, cruise the internet for websites and blogs pertaining to your interest and read them, watch you-tube videos, or ask your Uncle Charlie to show you how to replace that leaky head gasket. I worry that our modern society is rapidly becoming so specialized that the concept of DIY and self-reliance will become just an interesting anecdote in future history books (Future history? Jumbo shrimp?).

Now the Caveat: You’ll notice that above I said “almost anyone”. The most important point I should stress is to know your limits. If you are not comfortable attempting to work on your car than by no means should you do so. If you flub-up replacing a water pump, the worst that can happen is you make a mess and/or overheat your engine. If you work on brakes without proper documentation, knowledge and skills, you could get yourself killed (or worse, others). You may love the idea of woodworking but if loud machines with sharp blades spinning at 7200 rpm make you nervous, stick to hand tools.

At least be honest with yourself. If the last time you tried to install a new light fixture you almost burned down the house, consider it a sign. However, for even the most inept, there is always something you can learn to do yourself. 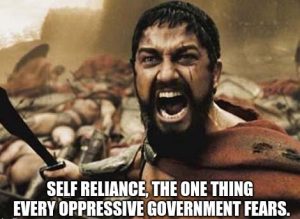 You’ve probably had enough, but here’s a P.S.:

In the title of this article I mentioned American Anarchism. Specifically, I am referring to American Individualist Anarchism which has nothing to do with the popular view of anarchism but instead, “stresses the isolation of the individual – his right to his own tools, his mind, his body, and to the products of his labor.” That is an exact quote from Eunice Minette Schuster and therefore, not modifiable to be gender neutral so we’ll assume the traditional intent that “his” refers to all genders if specified by the author (I don’t know if that is indeed the case, but let’s assume it so nobody gets butt-hurt).

Obviously, in these modern times, the “state” is a necessary evil (a debatable statement) due to the interconnections, both economic and political, across international borders. However, that does not preclude the liberties of the individual from being used to support self-reliance. I’m talking mainly about America, and other common-law countries; those of you who live in Switzerland (like me) will understand that while it is more difficult for the individual to be independent in a strict civil-law country, it is thankfully not impossible.

Basically, the American Anarchist holds a fundamental distrust of organizations, private or public, and large, in-your-face government, especially when their credo is “what we do (or sell) is in your best interest”.

A came across a great statement, with specific regard to woodworking, made by Christopher Schwarz, one of the many woodworkers I follow on-line:

“You might think that building quality furniture for yourself and others is a perfectly normal thing to do. I assure you it is not. Taking up tools and making something that lasts is one of the most subversive things you can do in this disposable society that encourages – nay, requires – rampant consumer spending.”

Words to think about. If you are curious for more, here are a few starter links:

Sewing Center Part 6: Frame and Panel Glue-Up; Sweat and Tears, but No Blood…