So, my son and granddaughter will be arriving soon and I’d really like to finish this coffee table in time for their arrival, not counting the oil finish, so I’ve put in a couple late nights and most of a weekend.

Wood is always surprising to me; when selecting the five boards for the top, one of them was a much lighter shade than the others, enough so that I asked my son if it would be alright to have this one piece down the middle (it was). By the time I had finished planing them to final dimensions, the difference was not so striking and, foreshadowing, once the oil finish was applied you couldn’t really tell the difference. 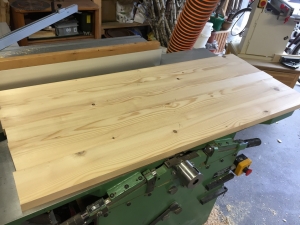 As usual, gluing up a table top gives me a bit of angst however, this is a small one (55cm wide) and in addition, I decided to use a few small dowels just to help the process. Now before you pull out the books by Tage Frid and point out that dowels are not wise in a tabletop and delete me from your blog list, I am using only three 6mm dowels just to help line things up and smooth the glueing process. In addition, I’m not gluing the dowels themselves, they’ll just float in the middle of these 30mm thick boards so I’m not worried about future cracks.

I have a center doweling jig that makes this quick work so I just mark the locations on both boards at the same time, drill the holes, and done. One thing I’ve noticed during past glue-ups is that even though I bought decent quality pipe clamps (Bessey), since the boards lay flat on the pipe and the force of the clamp screw is not centered on the edge of the board, they have a tendency to buckle. To help prevent this, I tape spacers to the pipe with painter’s tape where the glue line will be and this raises the assembly to that the clamp screw is centered and the spacers won’t stick to the underside. 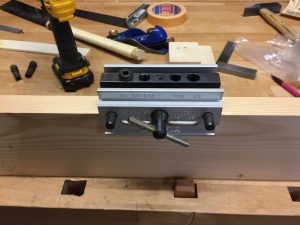 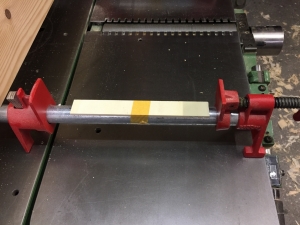 The pipe clamps are the main devices but I also install clamps from the top. When the glue sets up the assembly is nice and flat. I found out that unless you are glueing up the whole top at once it doesn’t hurt to do a pass with the jointer plane before going to the next glue step. 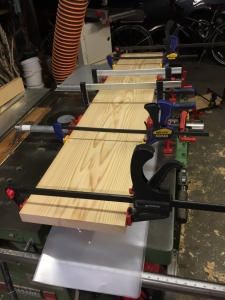 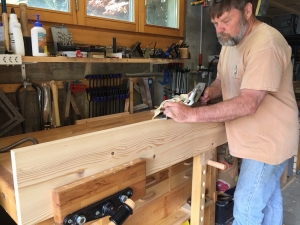 Alan liked the bowties I used on Bruce’s table and I had a pretty ugly imprefection I wanted to cover up so I used a bit of scrap cypress he brought from Florida. All I can say about this process in pine is to have freshly sharpened chisels and to creep up on the walls of the cutout. Even so, I had a bit of tearout. I think next time I will make the knife walls much deeper when marking the bowtie. After marking I chiseled out the rough waste and used a router plane to even out the bottom. I did without this tool for 25 years and now I’m kicking myself for not getting one sooner. 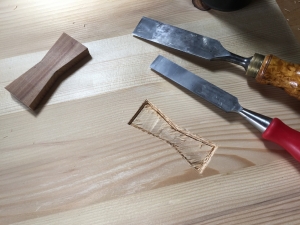 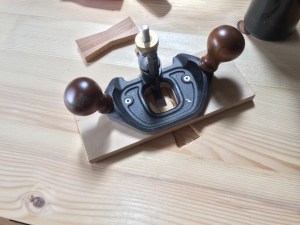 I glue in the tie with hide glue and plane off the excess after it’s set up a bit but not hard cured. 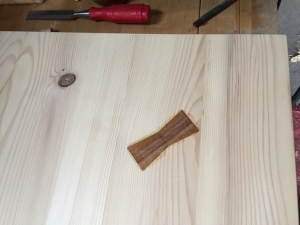 While the glue is setting up on the bowtie, I flip over the top “rough smooth” plane the underside. Sorry, remember this is barnwood furniture and the underside of the table doesn’t need to be perfect. One thing I do to cater to the people who will inevitably run their fingers along the underside is to smooth a 40mm perimeter around it (the approximate overhang from the apron). I’m done with the top for now and set it aside while I work on the drawer. 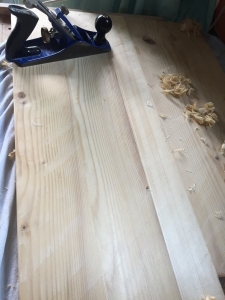 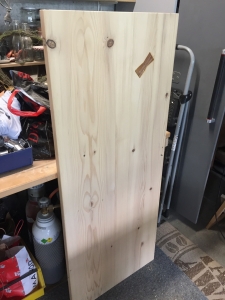 I’ve milled the drawer pieces just slightly oversize and marked the reference face and square edges. With a plane set for a fine shaving I dimension the sides, front and back to just fit (almost snug) in the opening and on the left and right sides. 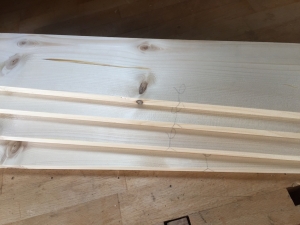 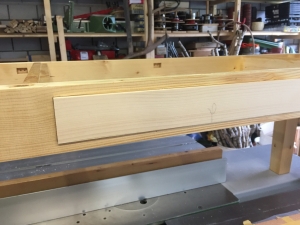 Something occurs to me, and that is even though this is a barnwood table and I’m not making it to be “fine furniture” it would be cool if just one part of it was “fancy”. I have a couple of 6mm scraps of lacewood that I can use to make a thick laminate for the drawer front. I edge joint the pieces carefully and use painter’s tape to hold them together while the glue dries. 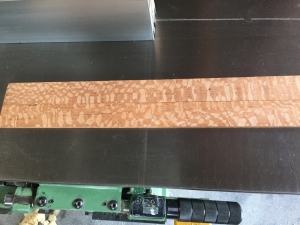 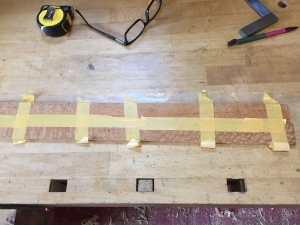 In the meantime, I mark and dovetail the front, sides, and back of the drawer. Since I am going to glue the lacewood to the front, and it is a good thickness, I can just through-dovetail the front and after the lacewood is attached it will give the appearance of having been half blind-dovetailed. This saves me about 20 minutes of extra work. 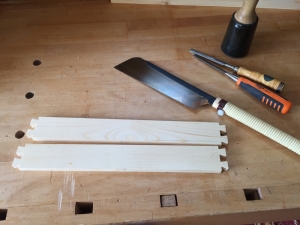 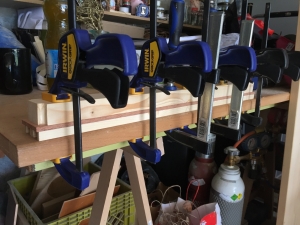 The bottom is to be solid wood (of course!) and I’ve selected pieces that are almost perfectly quarter sawn. I almost don’t want to use them….. 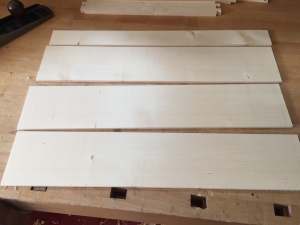 This will be a shallow drawer but the possibility exists to store a laptop in it so I want the bottom to be strong. Clamping thin panels gives me fits so I usually go overboard on clamps and cauls to keep it flat during glue-up. The dado that the bottom will slide into is 5mm but the bottom is a tad over 7mm thick. Rather than plane the whole panel down, I leave it thick and only plane a small bevel on the sides and front of the bottom piece till it fits just right (the bevel is on the underside of the bottom so there is no gap to be seen when the drawer is opened). 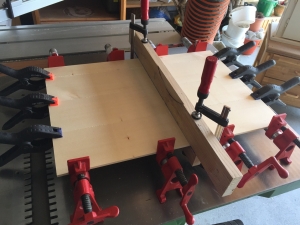 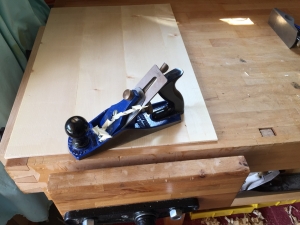 The last step for the drawer is to carve a pull out of a scrap piece of paduak. While I lived in the US, anytime I got my hands on something exotic for a build, I would always keep any cutoffs that were at least big enough for a drawer pull or handle. I’ve had a few pieces of paduak left over from a TV cabinet I built 10 years ago and the lacewood I’ve had since about 1999. Maybe I’m a pack rat when it comes to wood but it really pleases me when I can use those scraps for something like this, especially when it’s going to family. 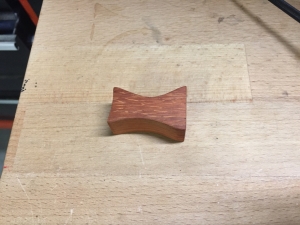 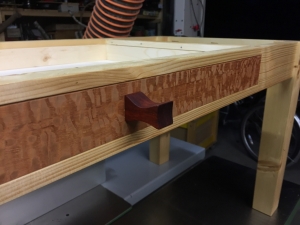 The paduak looks a nice deep red with wax applied but it will darken over time to a rich, dark brown. Also nice.

Last but not least, I position the base onto the top and install the furniture buttons. Since the screws holding the buttons will insert directly into the top, I’m paranoid about drilling the pilot holes (I have drilled through the top by accident before). Instead of wrapping tape around a drill bit like I usually do, I measure carefully how deep the pilot hole will be and drill a hole in a piece of scrap. Now when I drill down, the scrap prevents runaway and ensures each hole is the same depth. 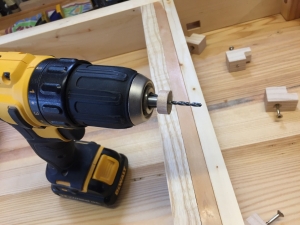 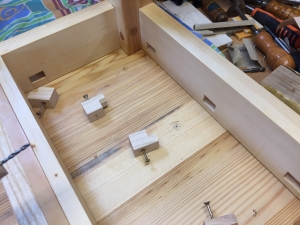 All that’s left now is a 2nd coat of oil on the base and 3 coats on the top followed by wax 🙂 . 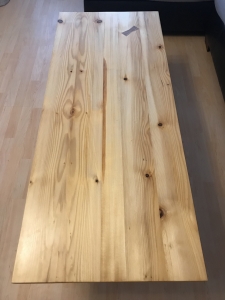 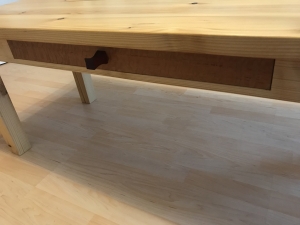 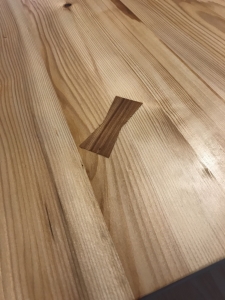 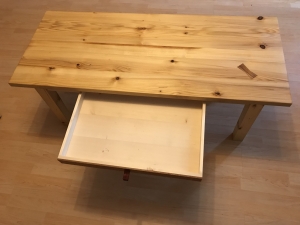 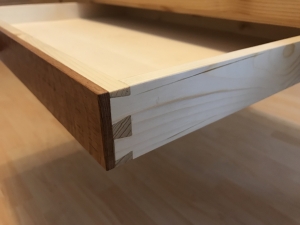 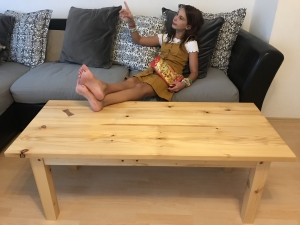 My Grand-daughter has already found a use for it 🙂 .

And now, back to the liquor cabinet, before I lose my client……