So this coffee table is coming along pretty well and I’ve made good progress the last few evenings. Every so often I’ll stop for a drink or to rest my feet (Someday, I’ll have a wooden floor to stand on. Or not.) and I’ll look ahead, thinking about the steps to come and if there is something that can be done easier now than later. 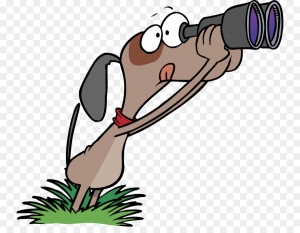 This goes without saying (therefore, we have to say it) however, there have been many times when I’ve thought that the next step was clear only to find out that something would have been easier done before the glue was applied.

I tend to overlook the end steps in my eagerness to move through the middle; planning for wood movement in a solid wood tabletop is one of those things I’ve often left till it was too late to plan for. This tabletop will have cleats, sometimes called furniture buttons to keep the top flat and allow for movement. The buttons will fit into small mortises cut into the aprons so it’s a good idea to cut those mortises before the glue-up.

As with the other parts of this table, I made the buttons pretty beefy with the tongue of the “L” shape about 10mm thick. The whole button is 20mm thick and I layout the mortises such that the top edge is 11mm from the top of the apron. That extra millimeter will allow for a tight attachment to the tabletop. You’ll see in the picture below right that the center button fits its mortise closely while the two on each end are about 4-5 mm wider (these are the end aprons that will experience side to side movement). The result is that the center of the top will remain fixed while allowing the rest of the top to move laterally. 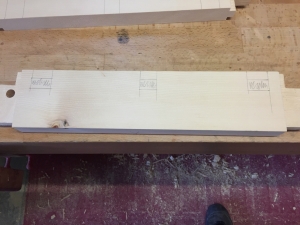 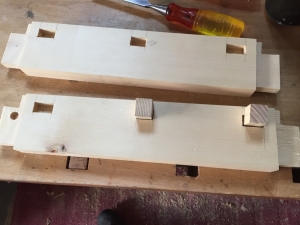 With that taken care of, I turn my attention to the drawer cutout in the side apron. This will be a very shallow drawer but still big enough for a laptop and a few magazines. I mark the dimensions of the cutout and drill two 8mm holes near opposite corners to allow the jigsaw blade to enter. With the jigsaw, I cut rough, keeping well on the inside of the line. 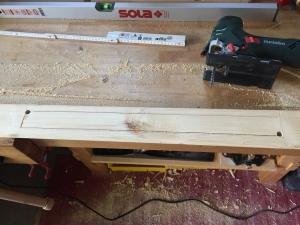 While there are less dangerous tools to trim the opening down to the line, I don’t balk at using the router when it makes sense. In this case I use two scraps with straight edges and clamp them to a long edge and one end. A flush cut bit with a pilot bearing is great in this situation as it will follow the straight edge and trim the cutout flush with it. I then flip the piece around and trim the remaining edge and end. 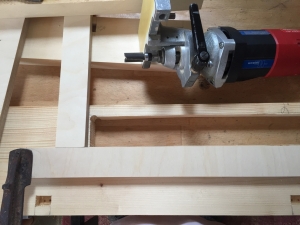 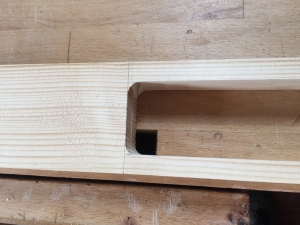 The only down side is the router bit leaves round corners but a sharp chisel makes quick work of turning these into square corners. I’m not above using a square block to help me trim these corners. Even so, I get a little bit of tearout. Pine really requires a very sharp chisel and patience. 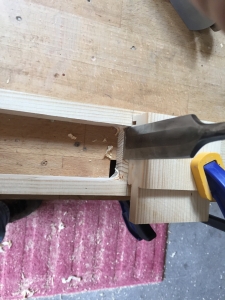 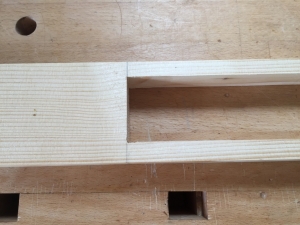 Next, I cut a couple of cross members that will serve not only to help strengthen the base, but also provide two sidewalls for the drawer space. I dry-fit and clamp the end assemblies in order to get an exact dimension for the cross members, specifically, where to cut the shoulders for the tenons. The apron is 30mm thick so I think it is safe to cut the mortise 10mm deep, maybe even a little more. I hold the cross piece square to the apron and mark for the mortise directly from the tenon. Afterwards, I use the chisel very lightly to define the walls of the mortise just inside the pencil line. That way I reduce the chances of cutting the mortise too wide. Normally, I would cut the mortise first but wanted to define the shoulders of the cross piece exactly before fitting the joint. 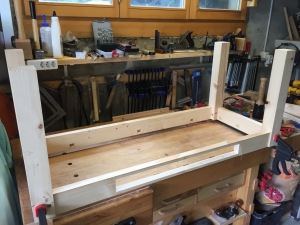 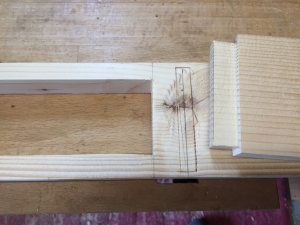 Again, I drill out the waste using the depth stop on the drill press set to bore a 12mm deep hole. Then, as with the aprons in Part 1, I clean up the mortise with chisels and use my router plane to fine tune the thickness of the tenon so it is snug.

A little snag; you’ll see below that I’ve made a mark where the drawer cutout is (should’ve taken a picture of the apron with the cutout). I had planned to use just the one crosspiece as the side of the drawer space but if I had, then I would be chopping a mortise only 7mm from the cutout. For me, that’s a disaster waiting to happen. Instead, I positioned the crosspiece an additional 15mm over and will glue another crosspiece to it to make up the difference. In addition, I cut the drawer runners out of hardwood and used a tongue and groove joint to attach them to the extra crosspieces. I did some searching on-line and this method of making a drawer space is uncommon and usually only used for small drawers. 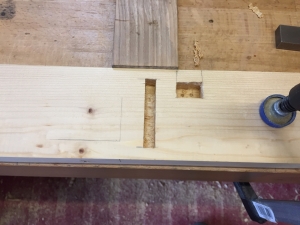 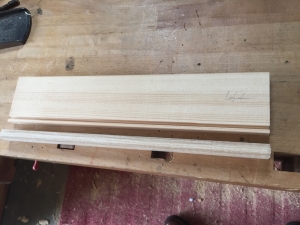 Since this is a wide drawer, I want a center runner to offer some additional support in the middle. It’s probably not needed since the drawer is so shallow but I just can’t stop cutting these mortise and tenons…..  I’m worried about there being so little wood spanning the bottom of the drawer cutout so I make the mortise on the front side for a tenon only 5mm thick while the one at the back will be a more substantial 8mm. Finally, before chopping this mortise in thin stock, I clamp two pieces of scrap on either side to give me some support. 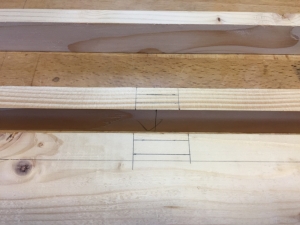 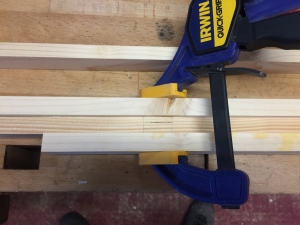 A fair fit, although I need to shave a bit off of the tenon length. 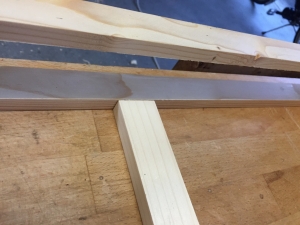 I like to glue up in stages whenever possible so I smooth plane the faces of these pieces and glue/clamp the crosspieces as well as the center runner. Double and triple-check that everything is square and reach for a beer. 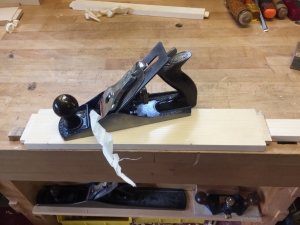 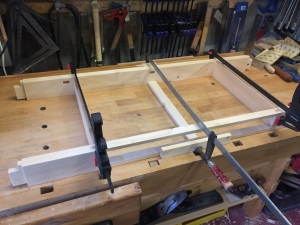 With that assembly set to the side, I turn my attention to the legs and end aprons. No further cutting is necessary on the aprons so I smooth them and start on the legs. We’ve decided that while the tapered look for the legs is good, it should be kept very minimal, as in not more than 5mm over a span of about 38cm and only on the two inside faces of each leg. I pencil in the taper line on each side and also a stop line about 20mm down from the mortise. I use this as a guide so I don’t plane the surface where I want a tight fit with the tenon’s shoulder. I use the bandsaw to cut just outside the taper line and then the jack and jointer plane to straighten and smooth the faces. 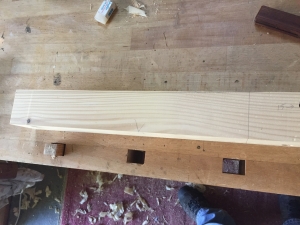 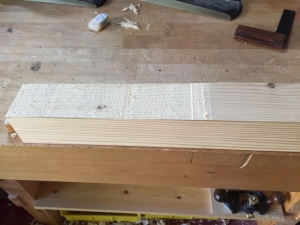 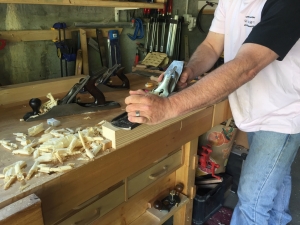 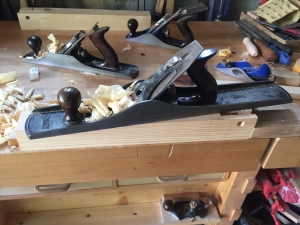 Now to fill some cracks and gaps (remember, this is barnwood) with epoxy. I’m not filling every minor defect, just the large gaps or cracks. I like the look of clear epoxy in a large gap but the trick is to pare the epoxy flat before it sets up too hard. While fully cured epoxy can be sanded smooth, I like the look of it better when it’s been pared with a chisel or plane. If the epoxy is fully cured the plane iron will likely cause a shatter effect on the epoxy, no matter how sharp the iron is. And of course, if you’re unfamiliar with a certain epoxy, it’s a good idea to test it on a piece of scrap. I bought a tube that was supposed to “dry clear” but it cured with a little bit of yellowish tinge. With a coat of oil over it it should be fine. 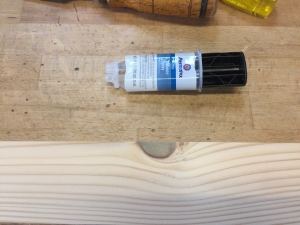 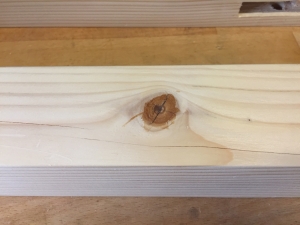 Finally, a last dry-fit to ensure everything will glue up nice and give me an idea of what needs to be tweaked square. It goes well, and so far the feet are all in the same plane. After the top is attached, I may have to shave a little off one foot or another in order to ensure they all rest flat on a surface. Note: sometimes attaching the top will cause the base to shift slightly so it is usually better to level the feet after the top is in place. As mentioned before, I like to glue up in stages so I begin with the ends. These drawbores are nice and snug and I’m happy with joints. 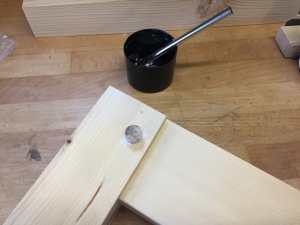 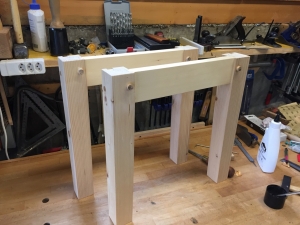 Before glueing these end assemblies to the rest of the base frame, I flush cut the drawbore pins and plane them smooth. 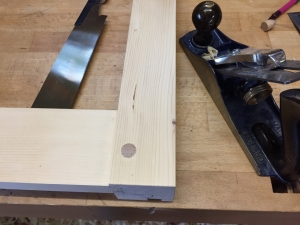 During the last dry-fit, I noticed that one of the apron/leg joints wasn’t quite closing flush (this is after gluing the end assembly, so it may have shifted a bit under clamping pressure). By taking a few slivers off of the opposite shoulder from the gap I’m able to get a good fit.  I don’t have a full shoulder plane yet however, the Record 77 bullnose does a fine job. 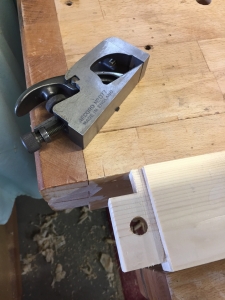 Now I can glue the end assemblies to the side apron tenons, pound in the drawbore pins, and grab a beer 🙂 . I’ll cut the pins off and prepare the entire base for finishing in the morning. 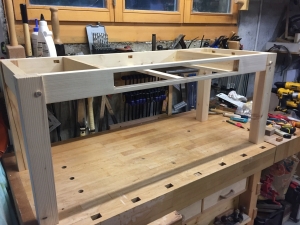