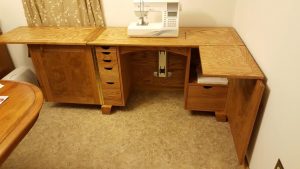 Click on most pictures to see a larger view.

As my wife loves to sew, and has been forced to use the dining room table for decades, I decided it was time build her a suitable sewing table/cabinet for her birthday this year. Knowing myself and my habits, and in order to complete the project by late May, I started planning it in September the previous year :-). It’s not that I’m so slow (I am), it’s just that I have this thing that keeps me occupied at least 40 hours a week. I’ve hinted to Pilatus that I would like to take a year off with pay in order to catch up on my projects but they haven’t responded yet…..

My first step was to search the internet for pictures of sewing furniture to get ideas. A true craftsman designs and builds his/her own pieces but since I’m creatively challenged, I like to have at least a picture, if not a plan, for what I’m going to build. I came across a “Sewing Central” article in a 1997 issue of Wood Magazine that I liked and showed it to Monika. There’s no way I could keep something like this secret during the build process and it’s better to involve the user of such furniture in the design decisions, or as in this case, the modification of the existing design. 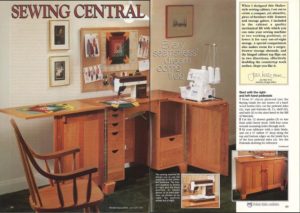 With her approval on the base design, we did some measuring. Her machine dimensions, her normal sitting position, height of table and the possibility of two different heights for the machine all needed to be considered. The cabinet will come with a hydraulic lift that allows the machine to be lowered when not in use while also providing for a standard height (like being positioned on a normal table) or slightly lower, that allows the infeed and outfeed to be flush with the surface of the top.

In addition, we discovered a fault in the original design. The machine should be positioned slightly more to the right of the sitting space instead of centered. Reason being, you typically sew while sitting in front of the needle area and not centered to the machine. This required an increase in the center space by about 10cm (4”) and will allow me to shift the opening in the top about that much to the right without interfering with the right pedestal section.

Monika doesn’t currently have a serger (the machine on the right in the picture above) and doesn’t need one on a regular basis however, she decided she still wanted the permanent shelf in the right pedestal where this would normally be stored. We’ll install a couple of shallow sliding trays above it or maybe just leave it for space to store fabric. What’s a serger? 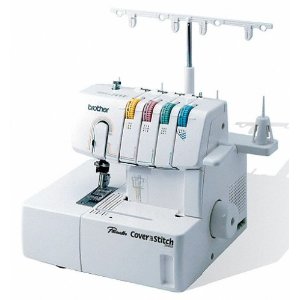 A serger is mainly used to strengthen seams in clothing. I like the idea of keeping the right pedestal as designed so that if Monika decides in the future to start using a serger, there is a space for it.

The height of the worktop with the leaves unfolded is 75cm (29.5”) which is the same as our dining room table. Monika is comfortable with that height as long as she has a height-adjustable chair.
She doesn’t…..

**Tangent** Recently at work I was able to try an interesting chair for a few weeks and liked it so much that I bullied Pilatus into buying me one. Normally, you should test drive a chair before purchase but I was so sure Monika would like it that I searched for a slightly used one on Ricardo (since the price of a new one was too painful). Ricardo is the Swiss version of e-bay. The main difference, besides being specific to Switzerland, is that it is impossible to “snipe” (bidding automatically at the last second, usually via some third party service). Each auction is automatically extended by 5 minutes every time someone bids close to the end. Some people don’t like this feature but I think it is a good one. If you want to make a business of buying and selling stuff, use E-bay. The chair design takes its inspiration from the horse’s saddle (cool points Sarah! :-)), and is made by HÅG in Norway. You can check it out here.  **End Tangent** 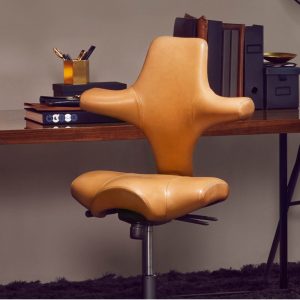 It’s worth mentioning that the original plan calls for the side and back panels, doors and top to be made out of plywood with solid wood edge banding. Nope, aint gonna do it. I’ll be using solid wood throughout with frame and panel joinery. This will take longer but will produce a piece of furniture that will probably be around a lot longer than I will, not to mention stronger and better looking (I hope).

Here is a blanket chest as an example of the frame and panel method: 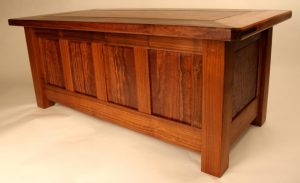 Last but not least, I suggested an additional fold-up leaf for the back to increase the work area enough for easy quilting. Monika decided that instead of an attached leaf, she would like a separate auxiliary table with folding legs that could be put away when not in use. I think this is a good idea because the aux-table could then be positioned more to the left or right as required instead of being fixed directly behind the machine as in this example: 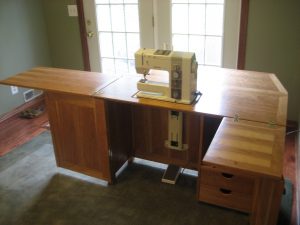 Decisions on other bits like drawers and shelves can wait till further along in the build process.  I now have all the basic information I need for the main carcass. Time to start picking out some wood!!

Introduction to the Sewing Center